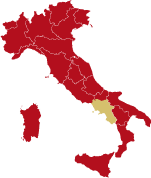 In the historic center of Naples, at the junction between Via Toledo and Via Sant’Anna, right at the corner of Piazza 7 Settembre, Romolini is proud to represent the sale of the piano nobile of the majestic Palazzo Doria d'Angri. Inside, the 18th-century building features many reception rooms (including the stunning and jaw-dropping Gabinetto degli Specchi) each beautifully decorated with masterworks by notable artists of the 18th century.

Located in a very prestigious and convenient position in the center of the city, a few hundreds of meters from the harbor, the palazzo is provided with all the services in the vicinity and has quick and easy access to many shops and boutiques.

The building is located right along the Spaccanapoli, the Decumanus Inferiore around which the Greek-Roman city developed, which is nowadays one of the most renowned streets of the city and a symbol of Naples. Spaccanapoli has always been a much-sought location in the city and over the centuries many noble and powerful families chose the road to build their palazzo and Palazzo Doria d’Angri is no exception.

The building is a dream location for events and ceremonies. Among the breathtaking rooms of the piano nobile, the most notable ones are the Gabinetto degli Specchi, a unique background for prestigious events, the altar room with an intimate chapel for private ceremonies, and the billiard room where one can spend pleasant moments with friends. Other rooms include six wonderful double bedrooms, each with its own bathroom and equipped with plasma TV, minibar, safe, air conditioning and Wi-Fi internet connection. The fully equipped professional kitchen allow taking care of all the possible occasions and events one could think of.

Leaving Naples, the most interesting centers of Campania, including the beautiful and stunning towns of the Amalfi Coast, can be reached in less than two hours by car (Caserta, Vietri, Mondragone, Positano, Amalfi, Formia, Cassino, Sperlonga…). With a ferry one can also reach the unique isles of the Campanian Archipelago (Capri, Procida, Ischia, Nisida and Vivara).

The airport of Naples is just 6 km from the property and can be easily reached with a shuttle service. The airports of Rome (Ciampino and Fiumicino) are also easily reached in just over two hours.

DESCRIPTION OF THE BUILDING

The ground floorof the palazzo (not included in the sale) is fully occupied by shops and boutiques. One can enter the building from the huge door on the façade, which then leads to the two internal courtyards.

Via a monumental staircase (or a convenient elevator connecting all the floors of the palazzo), one reaches the piano nobile (1,150 sqm – 12,374 sqft, 6 bedrooms and 8 bathrooms). Here the palazzo features some beautiful reception halls, each finely embellished with frescoes and sculptures. The most peculiar hall is without a doubt the Gabinetto degli Specchi (the Mirror Hall), a room frescoed by Fedele Fischetti and made extremely bright by the light bouncing off the many mirrors placed on the walls. The other rooms on the floor include a huge kitchen, ideal in case one wants to set up events, several sitting rooms and living rooms and six stunning bedrooms with en-suite bathrooms.

HISTORY OF THE PALAZZO

The history of this palazzo began in 1749, when the Genoese nobleman Marcantonio Doria bought a 16th-century palazzo in the heart of Naples. In 1755 a second house was bought right next to the previous one.

Doria’s idea was to build a family palazzo in Naples which would take the place of the two units. In 1760 the houses were being demolished when Marcantonio suddenly died without seeing his dream fulfilled. His work lived on with his son, Giovanni Carlo Doria, who tasked with the design the architect Luigi Vanvitelli (by then pretty old, but still highly regarded for his monumental work in the Royal Palace of Caserta).

When Luigi died, in 1773, the project was passed into the hands of other architects (Ferdinando Fuga and Mario Gioffredo) before being taken over by Carlo Vanvitelli, Luigi’s son.

The construction went on undisturbed until 1778: by this year, the building had already trespassed its intended borders and the work was halted. The Doria family was forced to buy the neighboring plot of land to be able to place the four columns of the façade and complete the palazzo. The idea of opening a second entrance door on the side was initially proposed but quickly abandoned, and a new doorway was opened at the rear of the palazzo.

In the first half of the 19th century, the Doria tasked the architect Antonio Francesconi (who had already left his signature on the family’s palazzo in Posillipo) to rework the interiors of the property to convert it into a private dwelling.

On September 6, 1860, Francis II of the Two Sicilies left Naples and moved to Gaeta and Capua, where he hoped to reorganize his army to face Giuseppe Garibaldi. The following day (September 7, the date that gave the square its name), the Hero of the Two Worlds entered Naples with his men, and the Spanish garrison refused to open fire. Once inside Palazzo della Foresteria, Garibaldi spoke to the citizens of Naples:

“You have the right to rejoice in this day which is the beginning of a new age not just for you, but for the whole Italy, of which Naples is the best part. It is truly a glorious and holy day, in which the people moves out of its state of servitude and enters the ranks of a free nation. I thank you for your welcome, not just in my name but in the name of Italy, which will be with your help free and united”

Garibaldi moved then to Palazzo Doria, from whose balcony he spoke again. This scene is portrayed in the famous painting Ingresso di Garibaldi a Napoli il 7 settembre 1860 by Franz Wenzel Schwarz (1860).

On the same subject, the work by Schwarz also allows appreciating the palazzo in its original state: the building featured on the façade the Doria coat of arms and a crowning with eight marble statues. During World War II, Allied bombs irreparably damaged the building’s façade, completely destroying the coat of arms and six of the eights statue.

The palazzo features a trapezoidal plan, with the main façade placed on the short side and oriented towards the square. This façade, in a typical Neoclassical fashion, is split into three levels: the lowers one features the entrance door, marked by four Doric columns supporting the balcony above; the central level features Ionic half-columns, framing three windows (the central one gives access to the balcony); the upper floor (the most damaged) once sported the Doria coat of arms and the statues which have been destroyed in World War II.

The sides of the palazzo, less visible and interesting from an architectural perspective, are much simpler in shape and only feature a series of gabled windows.

The rear of the building, right in front of Palazzo Carafa di Maddaloni, still features the secondary entryway which was then closed just a few years after its creation to put an end to the long-lasting quarrel between Doria and Carafa.

Seen from above, the palazzo boasts two internal courtyards, a hexagonal one (which clearly recalls a similar one, octagonal in shape, found in the Palazzo Serra di Cassano in the San Ferdinando neighborhood) and a rectangular one, connected by a vaulted passageway.

Inside, the palazzo is decorated in typical 18th-century fashion: one can admire several paintings by Fedele Fischetti (among which the beautiful one in the Gabinetto degli Specchi, portraying the return of Lamba Doria after the victorious battle of Curzola against Venice). Particularly interesting is the gabinetto degli specchi (the Mirror hall) on the first floor, where one can see paintings by Francesco Solimena (1657 – 1747) and decorations by Girolamo Starace-Franchis (1730 – 1794). The private chapel on the piano nobile was embellished and painted by Giovanni Maria Griffoni (1750 – 1798).

USE AND POTENTIAL USES

The palazzo, in excellent condition, is one Naples’s jewels and is a notable reference point for those who are interested in the history of the Italian Risorgimento. The building, thanks to its generous size and beautiful internal finishes, is perfect as a location for events and meetings. 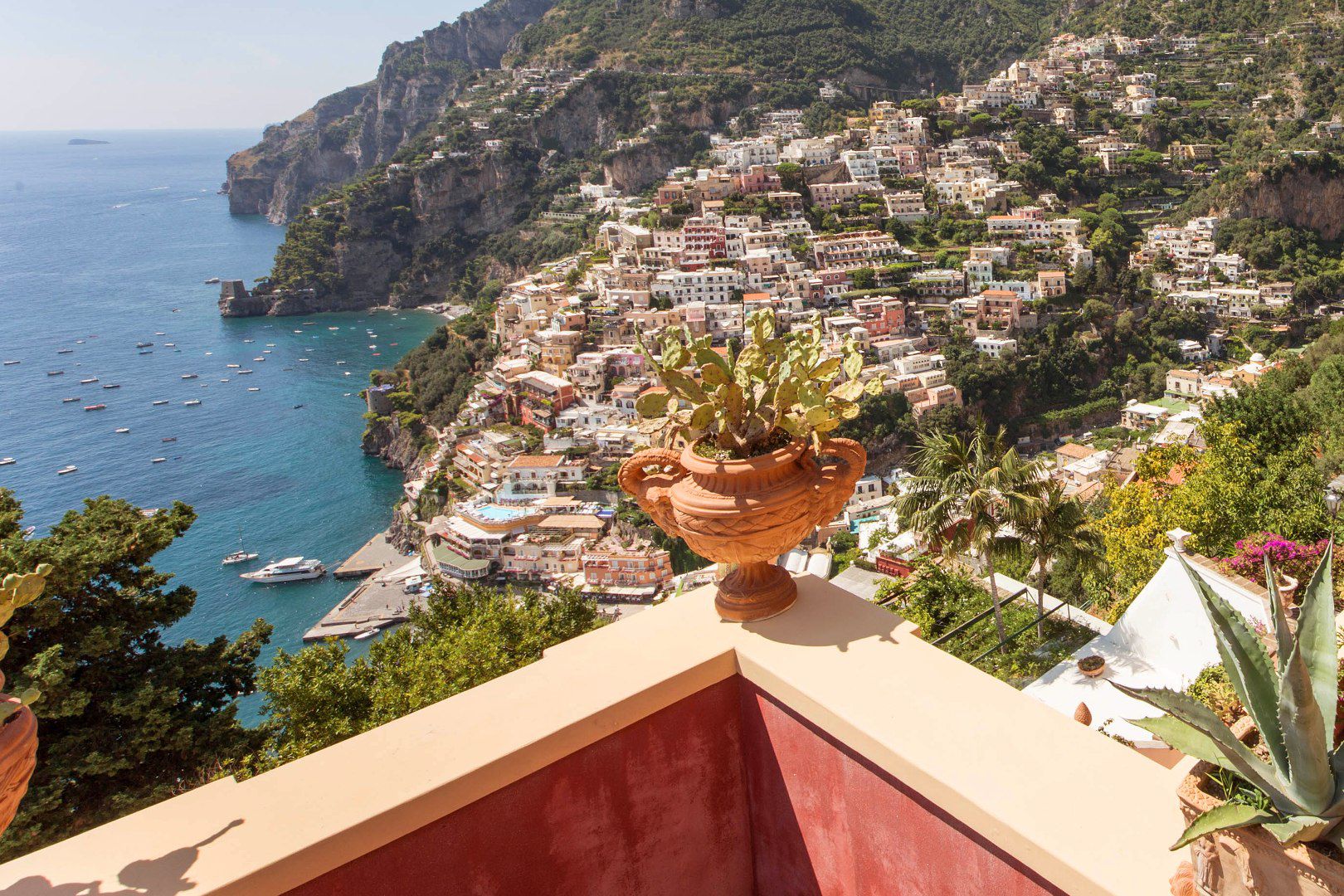 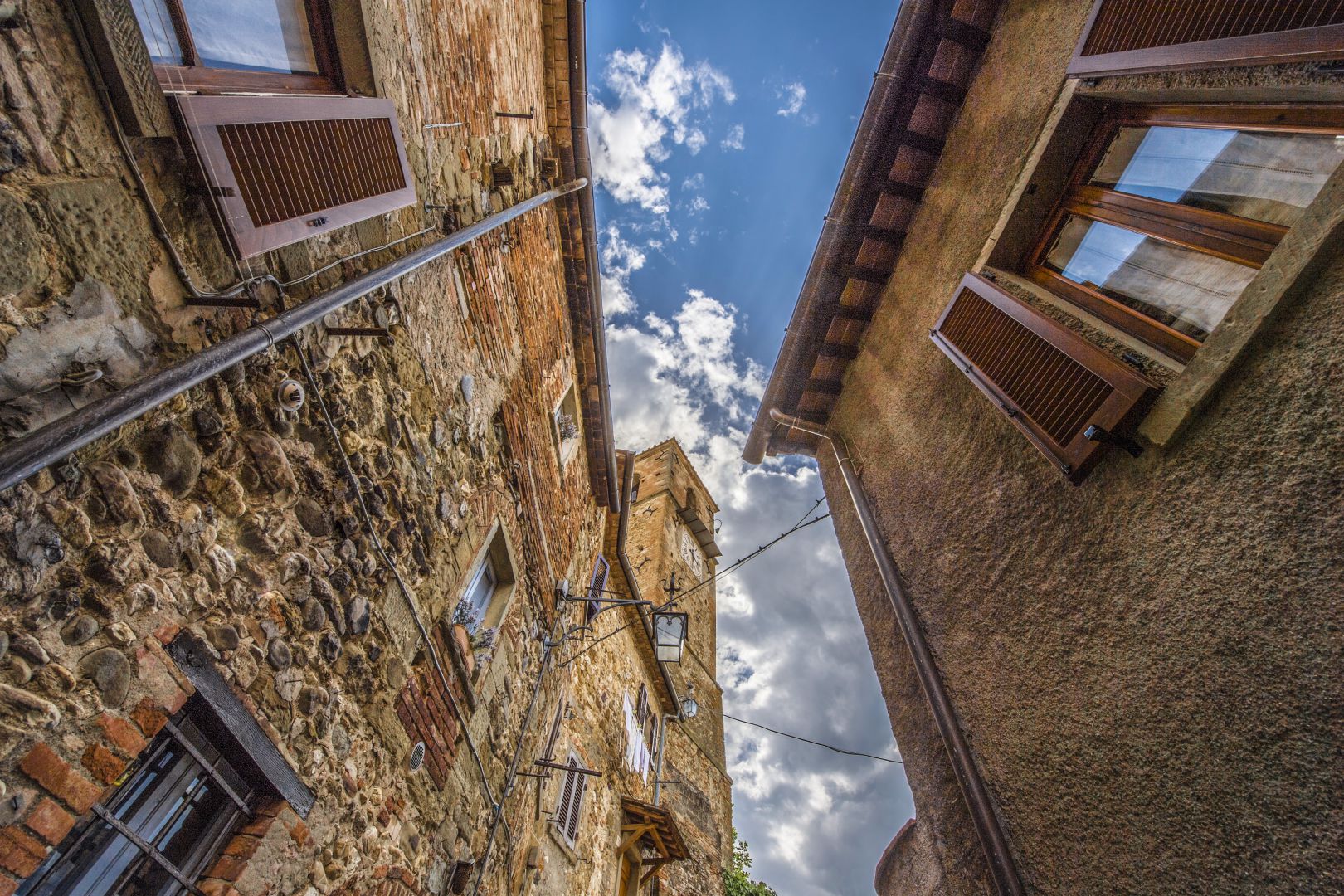 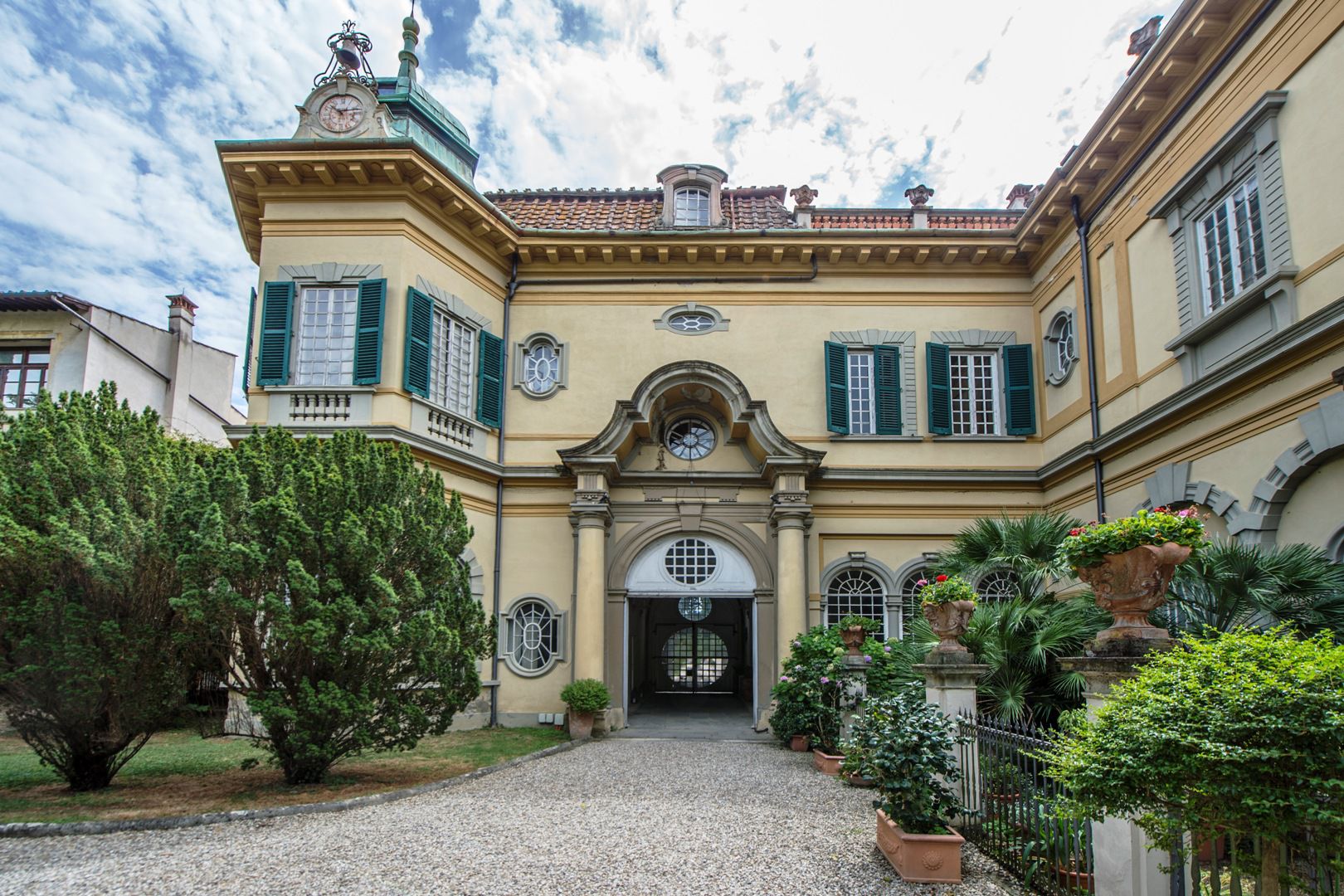 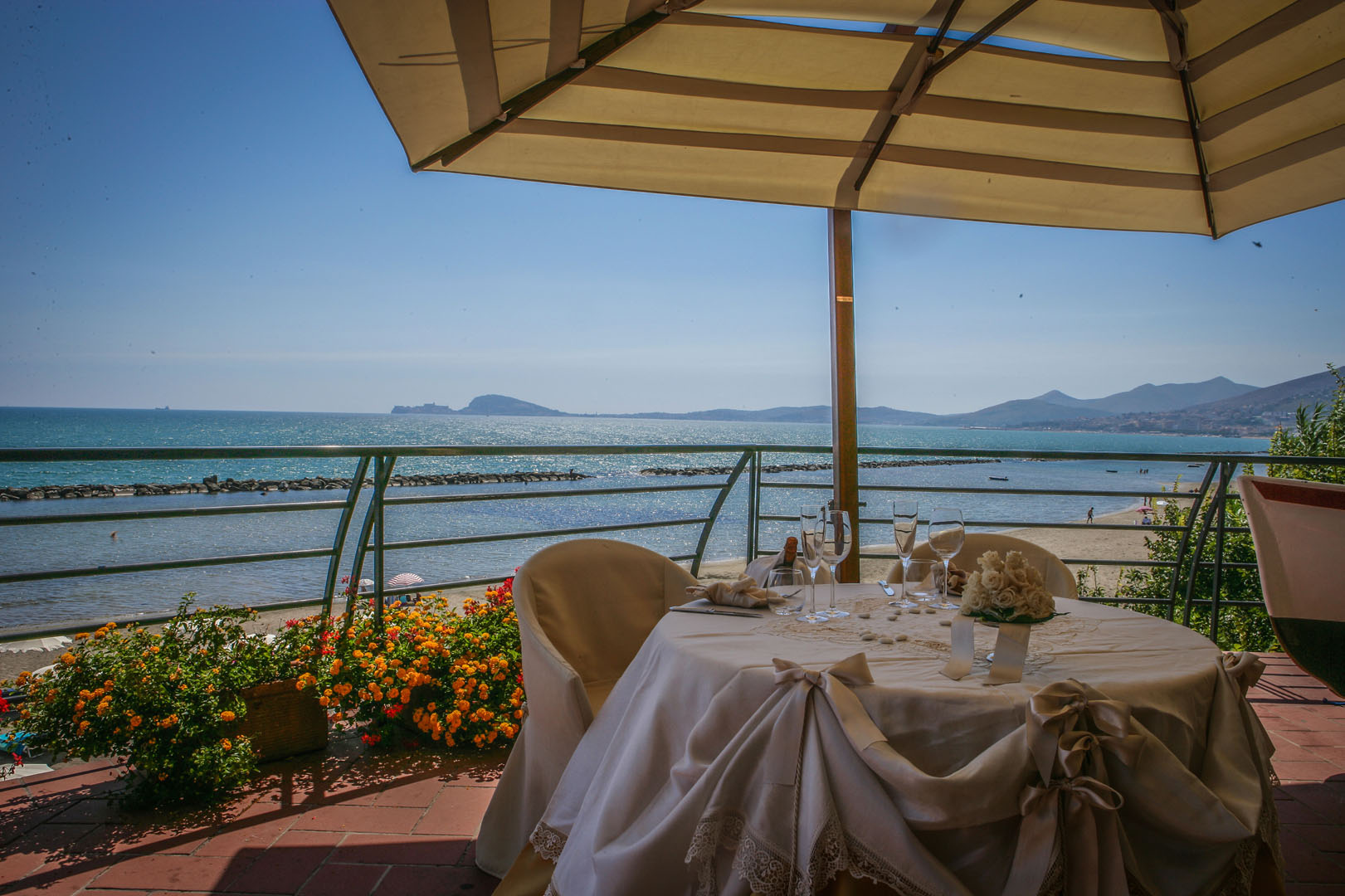 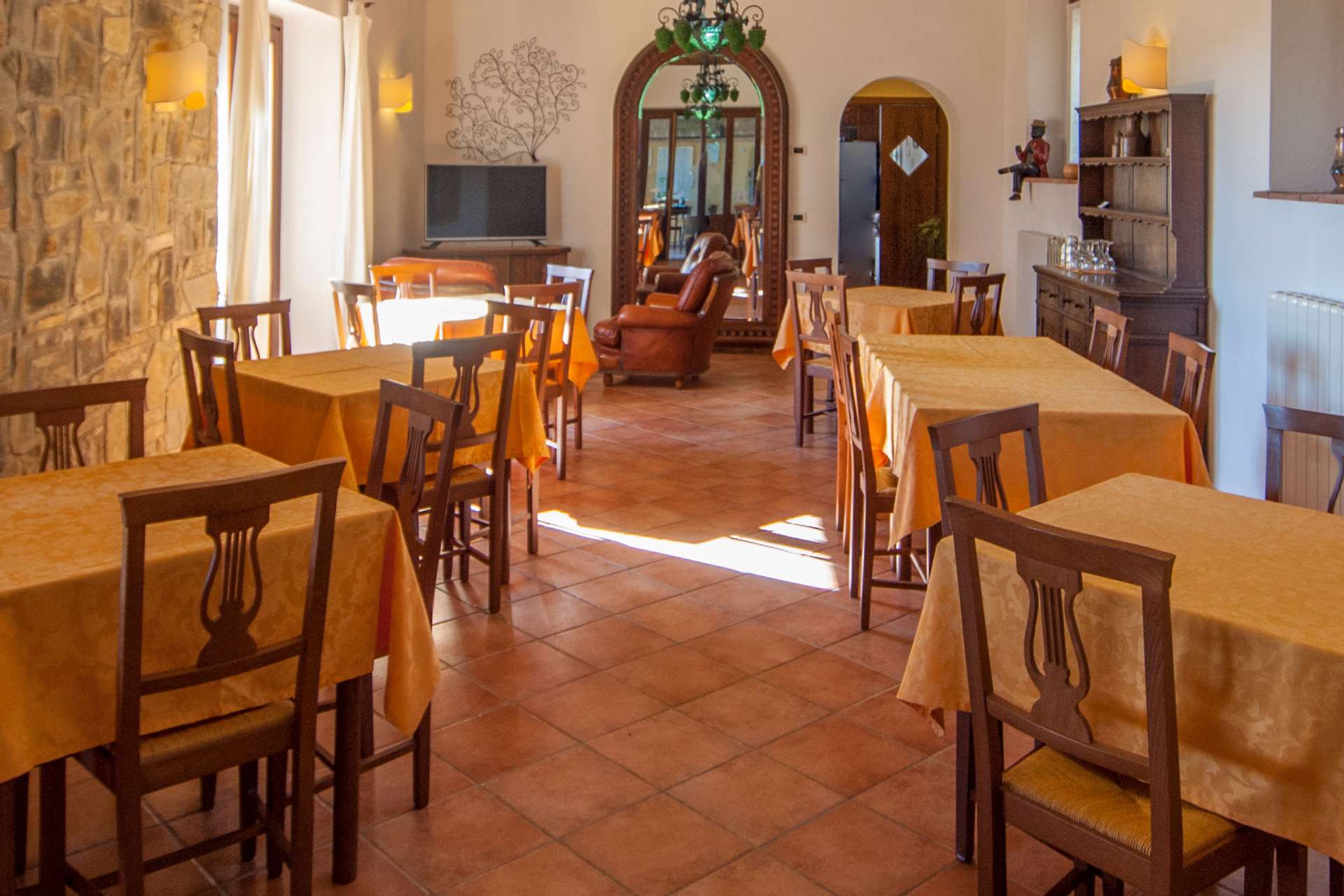 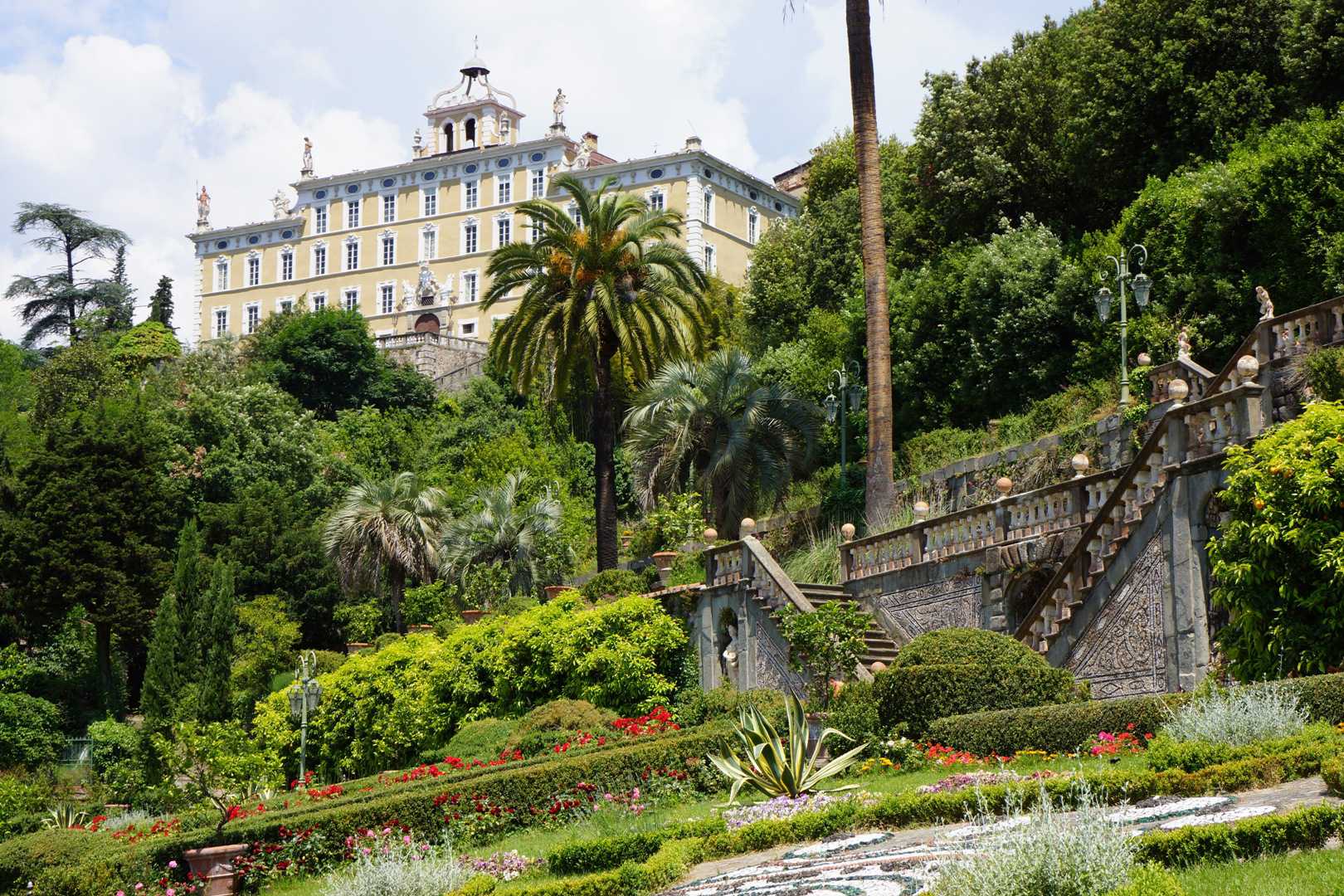 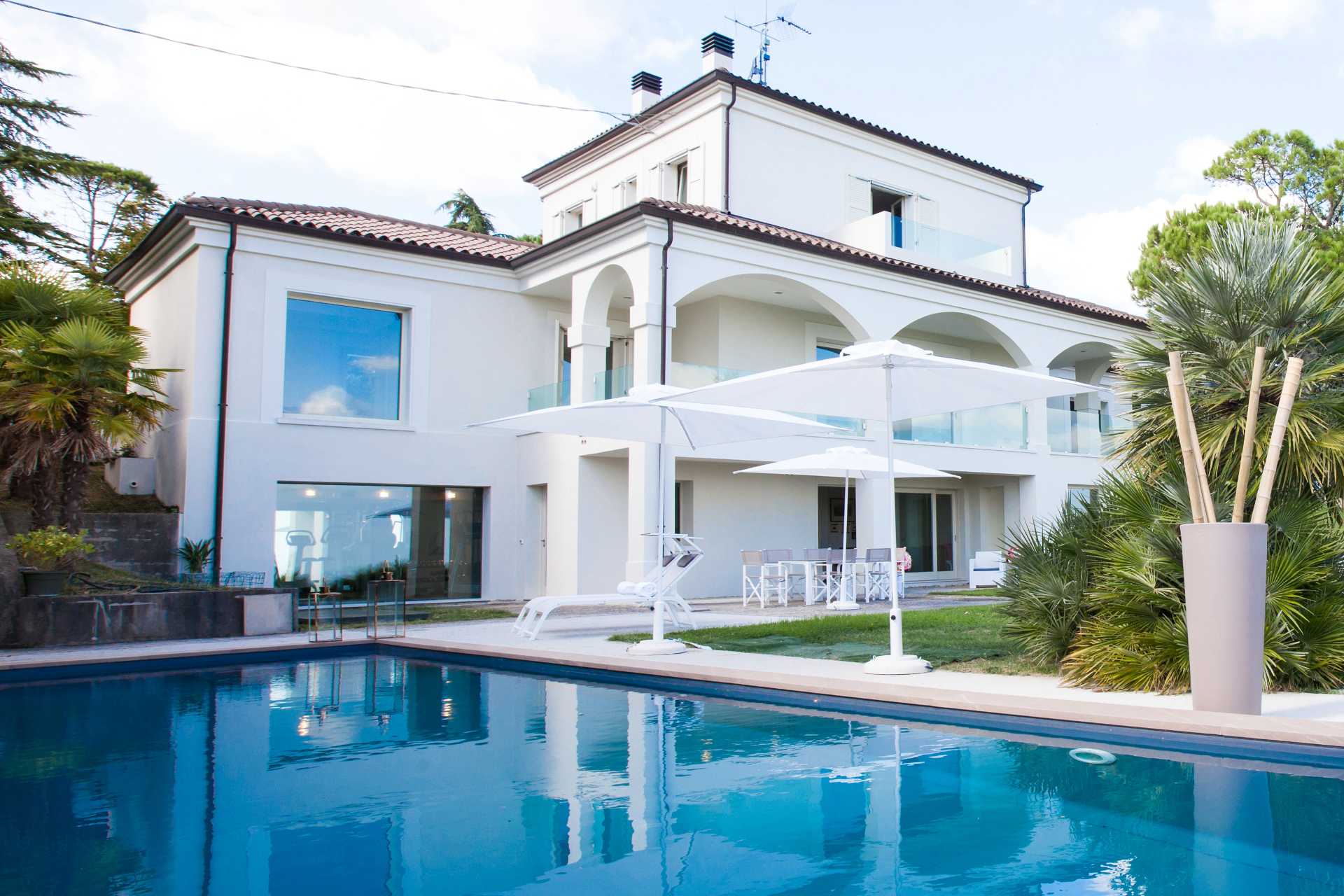 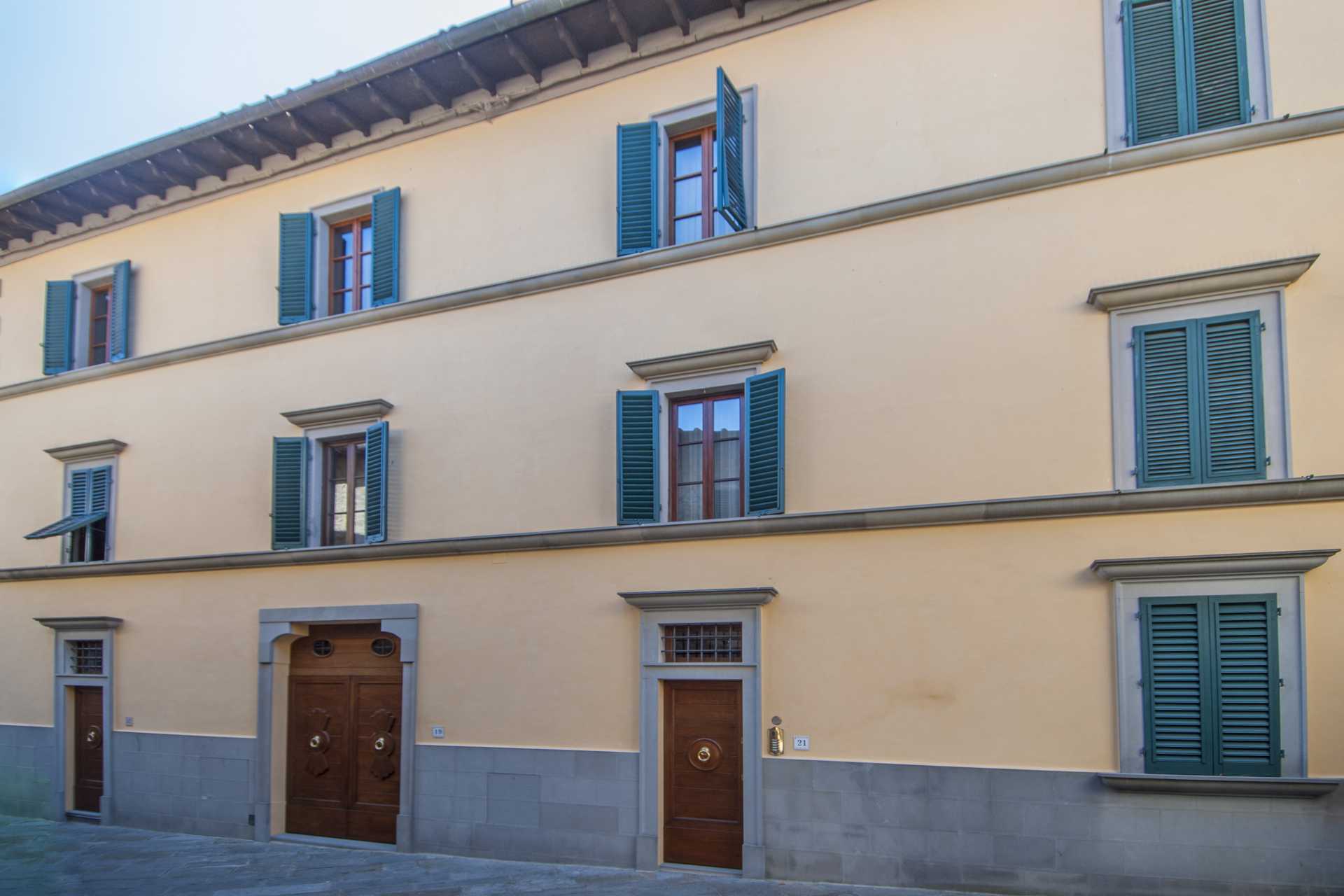 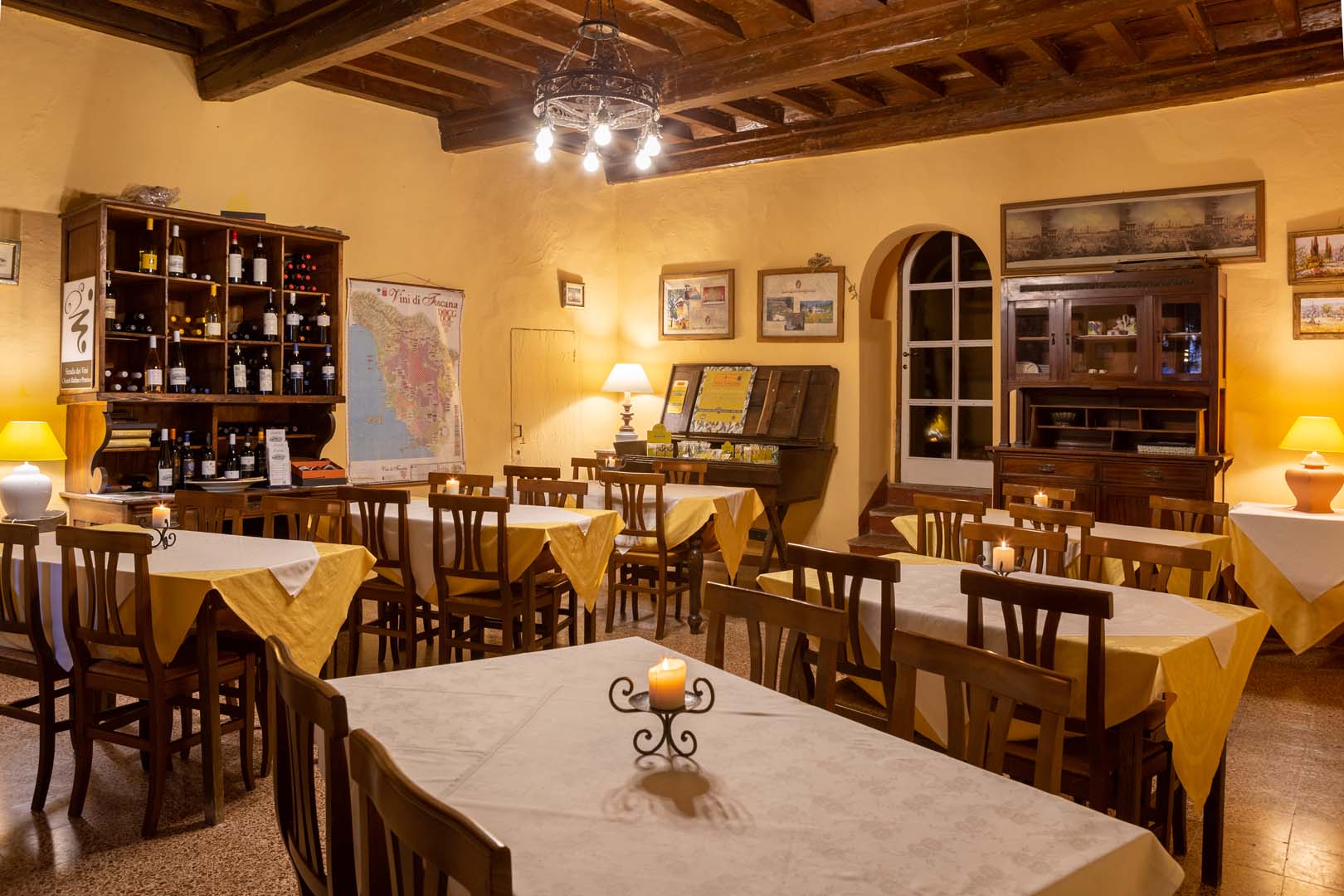 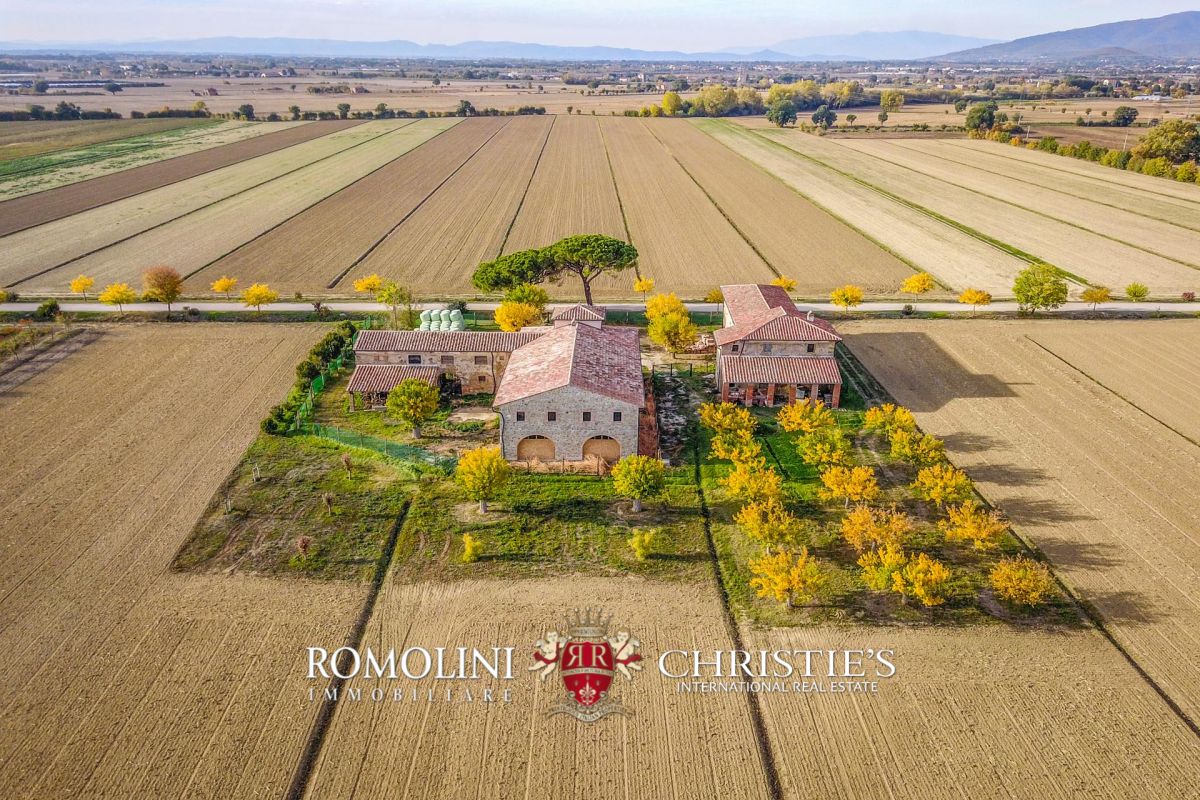 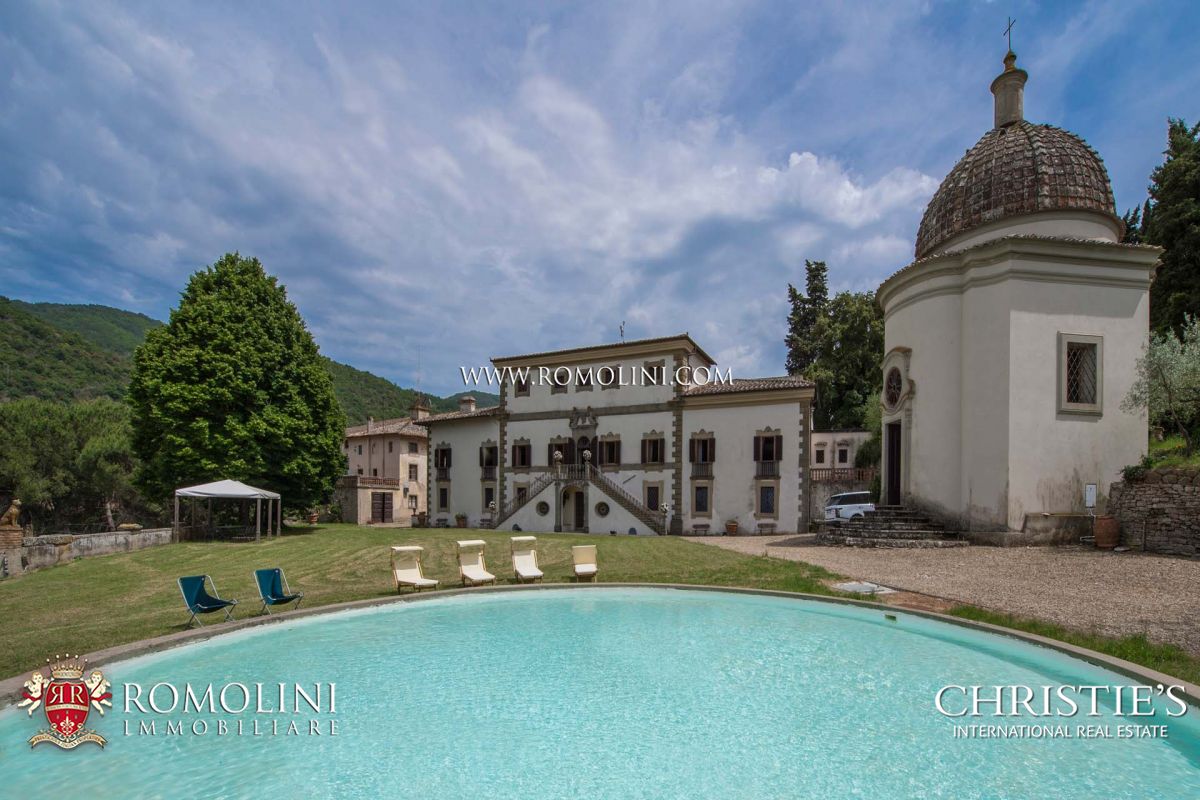 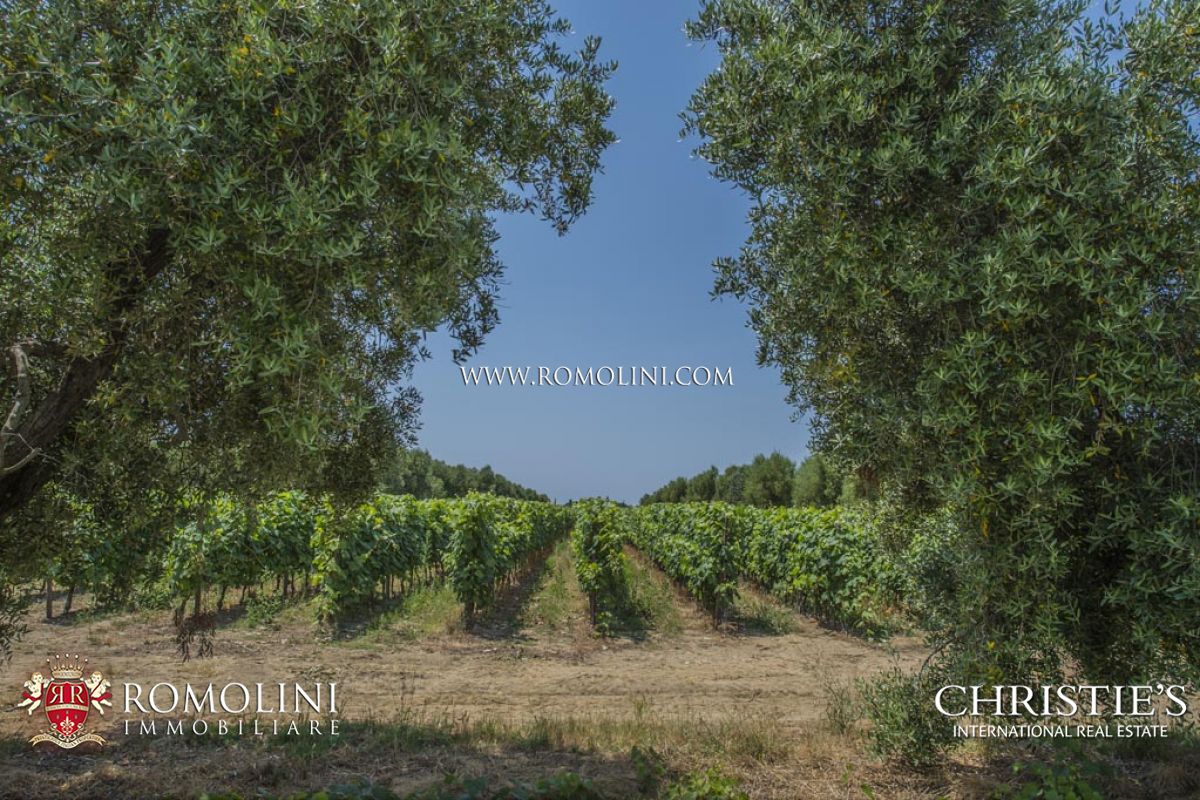 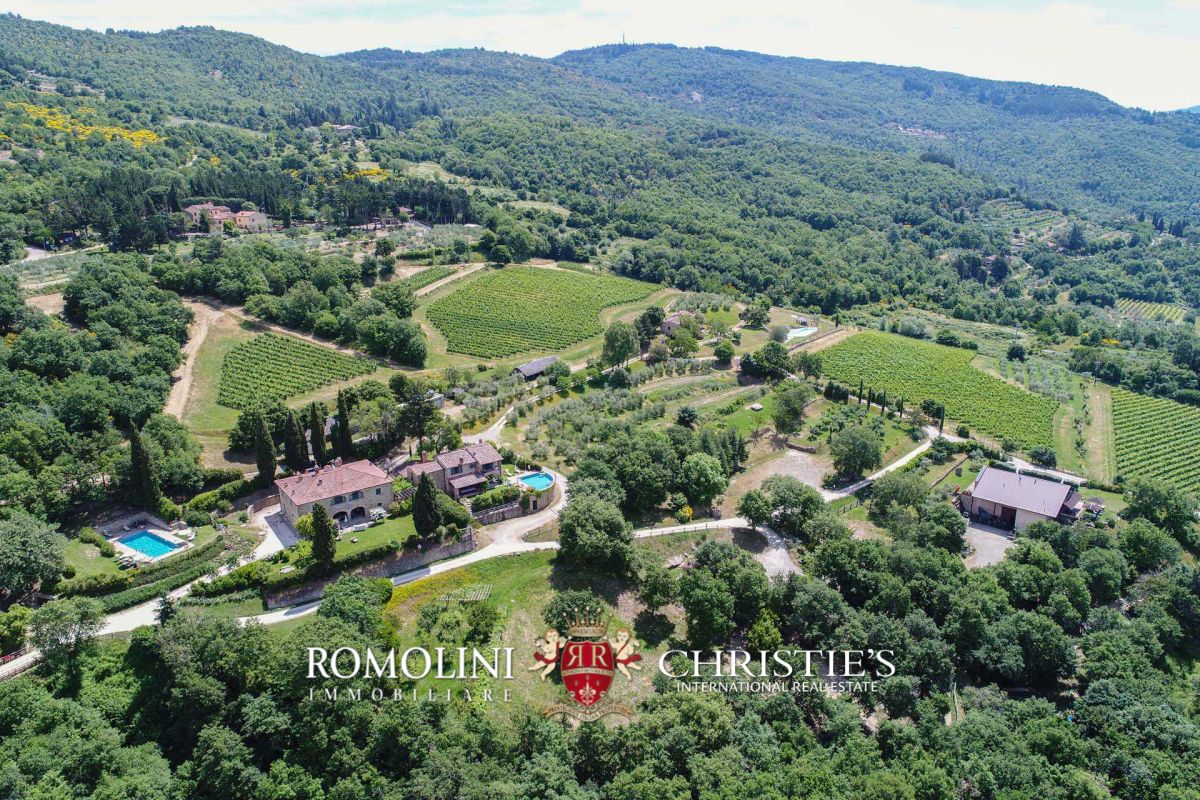 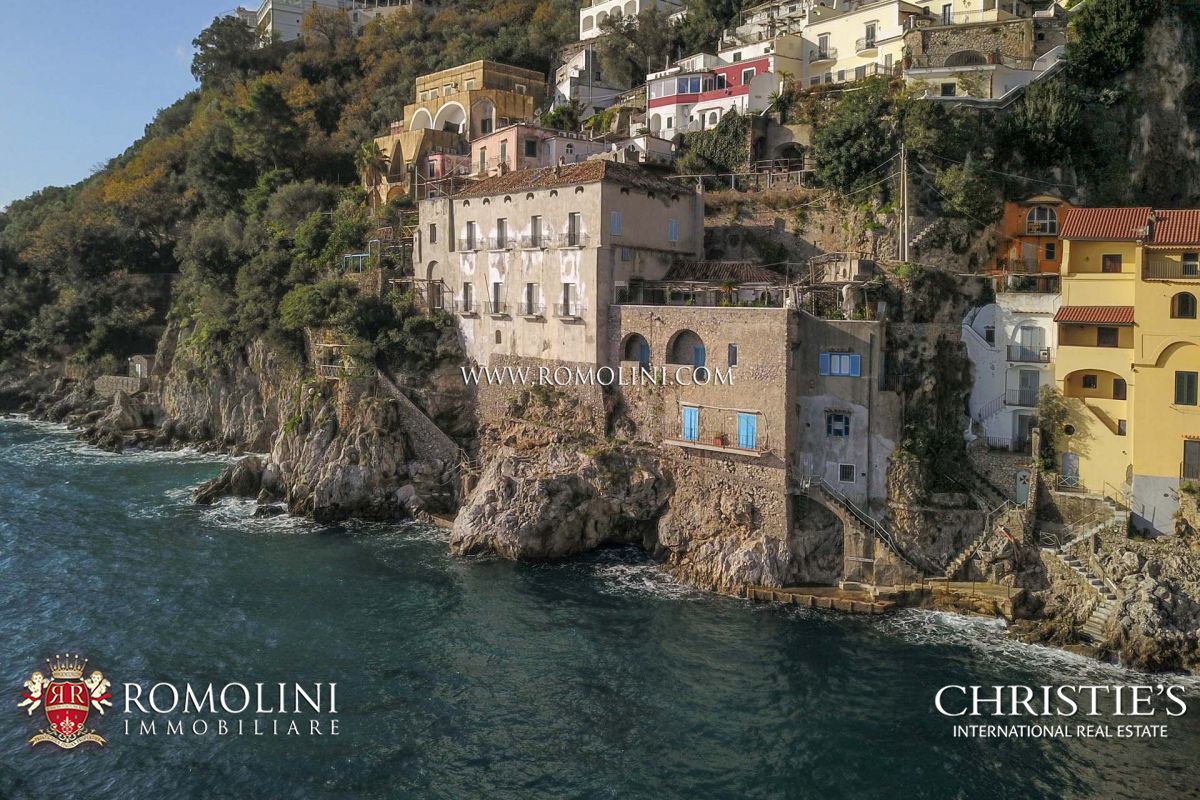 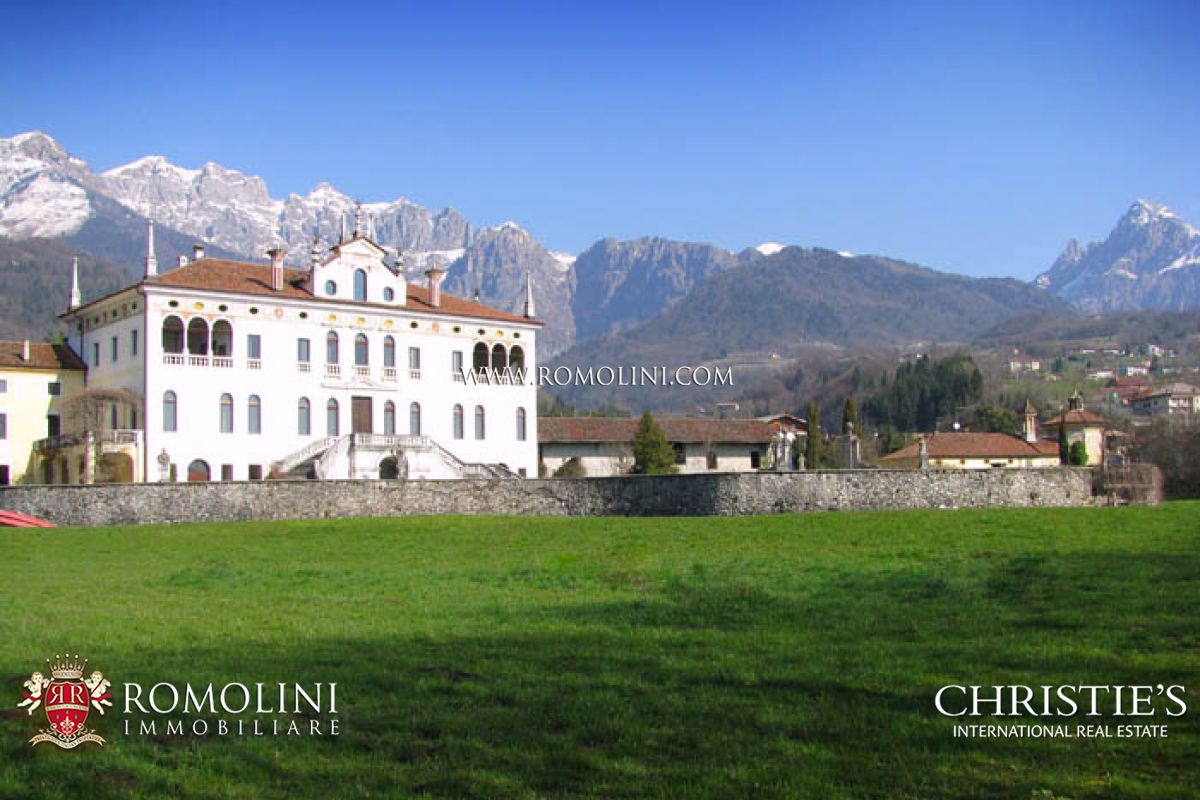 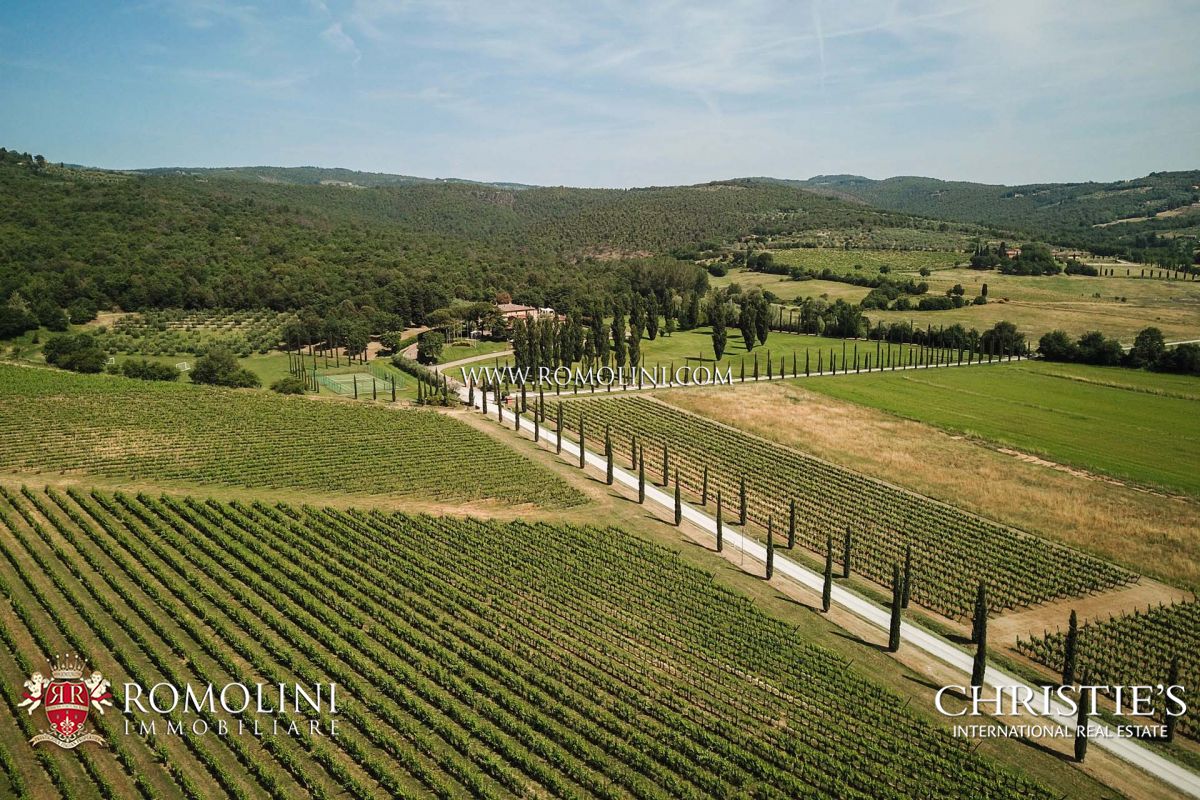 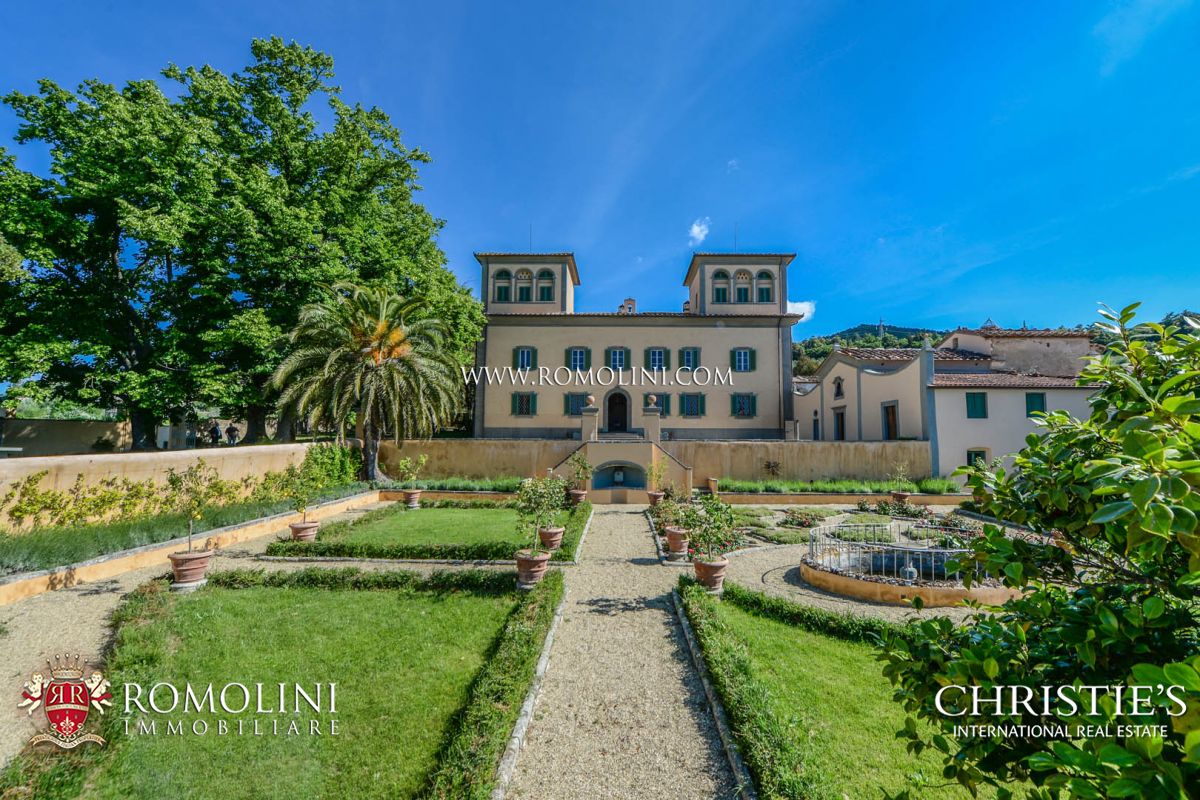